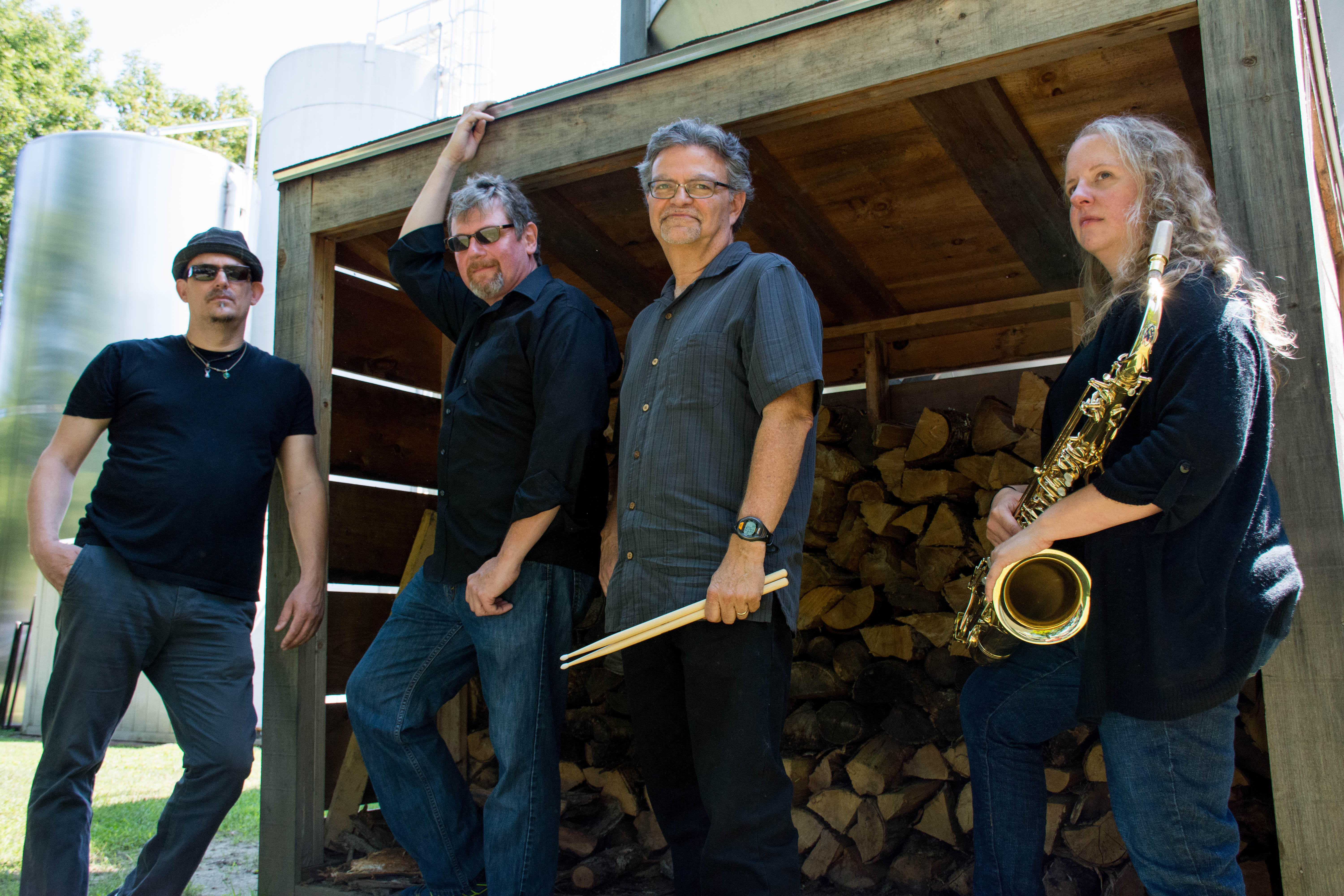 TOAST, the funky band from our area will be playing at this year’s finish line!

Toast is an Upper Valley funk and soul band, performing original music and covers.  They’ll be at the finish line from noon to 5 p.m. on Sunday, September 24.

Here’s a sample of their original tune “The Fool”

A little about the band…Jim Yeager, guitar and Vocals; Barb Smith, saxes and flute; Scott Paulson, Bass and vocals; and John Foster, drums.

Many of you may know Scott and Barb from their steel pan playing at Margaritaville!

Jim Yeager, songwriter/producer/performer
Jim Yeager is a singer/song writer, performer, music producer and multi-instrumentalist whose original works have embodied upwards of one hundred-fifty compositions and thirty some years. In 1997 he released his first full length album (and supporting tour) with his then band Vitamin F. Since then Jim has shared the stage/studio with the likes of: Andy Kravitz, Val McCallum, The Nicolo Brothers, Billy Shaw, Jenny Barry, Disco Biscuits, Geri Mingori Band and Blessed Union of Souls. He is currently finalizing his first, completely self-produced album entitled “The Beauty of Imperfection”, which will be available in 2016.
Jim lives in Hartland, VT by way of Philadelphia, PaBarbara Smith, Saxophones and Flute
Barbara Smith attended Bard College as a Liberace Scholar, where she received her Bachelor of Arts with a focus in Music Performance. While at Bard, she worked with Joan Tower, Luis Garcia-Renart, flutist Patricia Spencer, saxophonists Erika Lindsay, Harvey Kaiser and Howard Johnson, clarinetist Larry Guy, and performed as a solo flutist with the American Symphony Orchestra. In 1999 she toured the United States, Russia, and Central Europe as a saxophonist with the American Russian Young Artists Orchestra under the direction of Leon Botstein. In 2000 she served as a guest panelist at the New York City Flute Convention. Barbara performs in the area with Toast, The East Bay Jazz Ensemble, Island Time Steel Drums, and a variety of other bands, and as a solo flutist. She has also served as an adjudicator for district and state music festivals. She regularly serves as a chamber music coach for Green Mountain Youth Symphony. She is the co-founder of Vermont Independent School of the Arts in Sharon, VT where she has a teaching studio. Many of her students participate in district, state, and regional music festivals, and have pursued a collegiate career studying music.

Scott Paulson, Bass and vocals
B.A. Music from Johnson State College, Vermont. Scott has taught instrumental music programs, jazz bands, steel bands and percussion groups in area private and public schools since 1996. He has done Steel Drum workshops for such entities as The Vermont Alliance for Arts Education, The Green Mountain Suzuki Institute , plus several Vermont Public Schools and even as far away as North Carolina. He has played and recorded with a myriad of groups in various genres and on a variety of instruments, notably as leader/ front man/ steel pannist /bassist with the eclectic group SKABAZZA, which performed at the 1998 Phish festival “Lemonwheel” in Limestone, Maine. He currently plays lead pan in several of his steel bands,and has plays Bass Guitar with folk instrumentalist “Spencer Lewis as part of the Folk Rock Project.” He has played bass, drums and percussion with several bands as well as Highland Bagpipes with The Catamount Pipe Band.

John Foster, Drums
John started playing drums professionally at age 16, moving from his home in New York State to play for a band in Youngstown, Ohio. He later accepted an offer in Nashville, Tennessee, playing on the road and doing studio work. He made his living playing drums in Nashville for the next several years,and later went back to school for a degree in Wildlife Management, earning a B.S. from the University of Maine and a masters degree at Southern Illinois University, focusing on the technical side of Wildlife Ecology. John continued to play drums on the side, while working with NASA in Mississippi and the Department of Natural Resources in South Carolina. John, and his wife, Becky, moved to the Upper Valley in 2006 and he currently works at the Cold Regions Lab of the U.S. Corps of Engineers in Hanover, NH. John has enjoyed getting involved with the music community here in the Upper Valley, playing with several groups including The Wall-Stiles, Redhouse, Wild Roots, The Wildlifers, Loose Cannons and other singer/songwriters in the area.