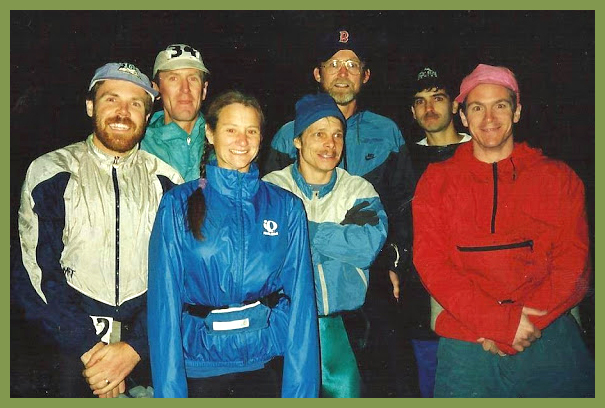 The Vermont 50 Mountain Bike or Ultra Run was started in 1993 by West Windsor resident, Laura Farrell (left in blue jacket) and just a hand full of runners.

It has since grown to over 1300 Mountain Bikers and Ultra Runners.

This race benefits Vermont Adaptive Ski and Sports which was also founded by Laura.

Vermont adaptive is a wonderful place where youth and adults with disabilities gain a measure of self confidence and independence by participating in adaptive sports programs and activities year-round.

There is something for everyone; the 50 mile Mountain Bike Race, the 50 mile Ultra Run, the 50K Run, the Team Relay and the Kids Fun Run.

Spots fill-up quickly so early registration is a must! 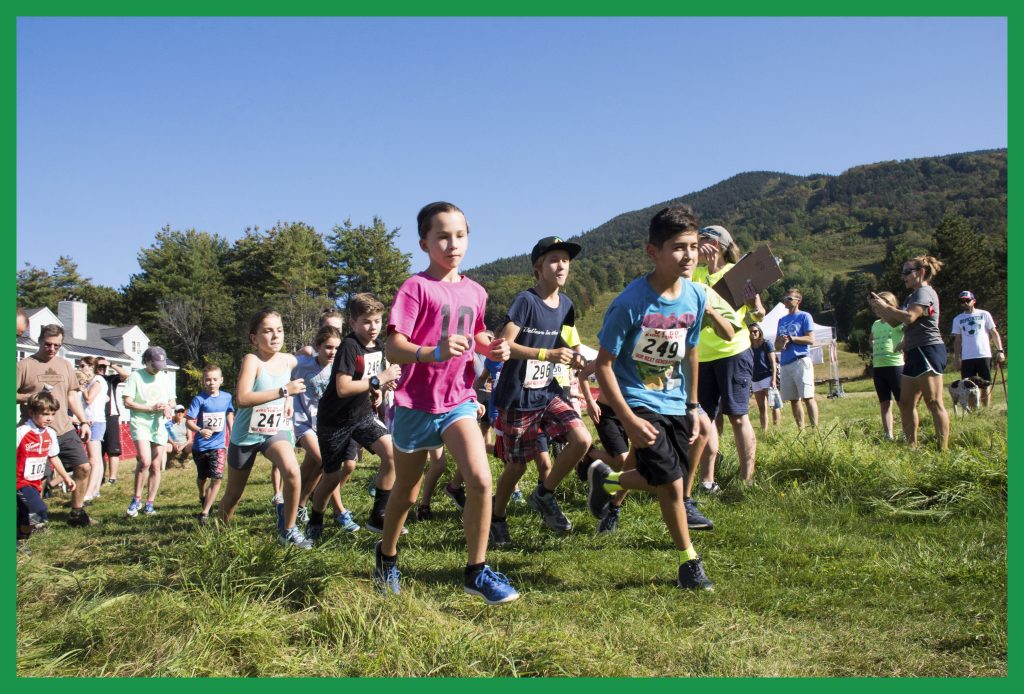 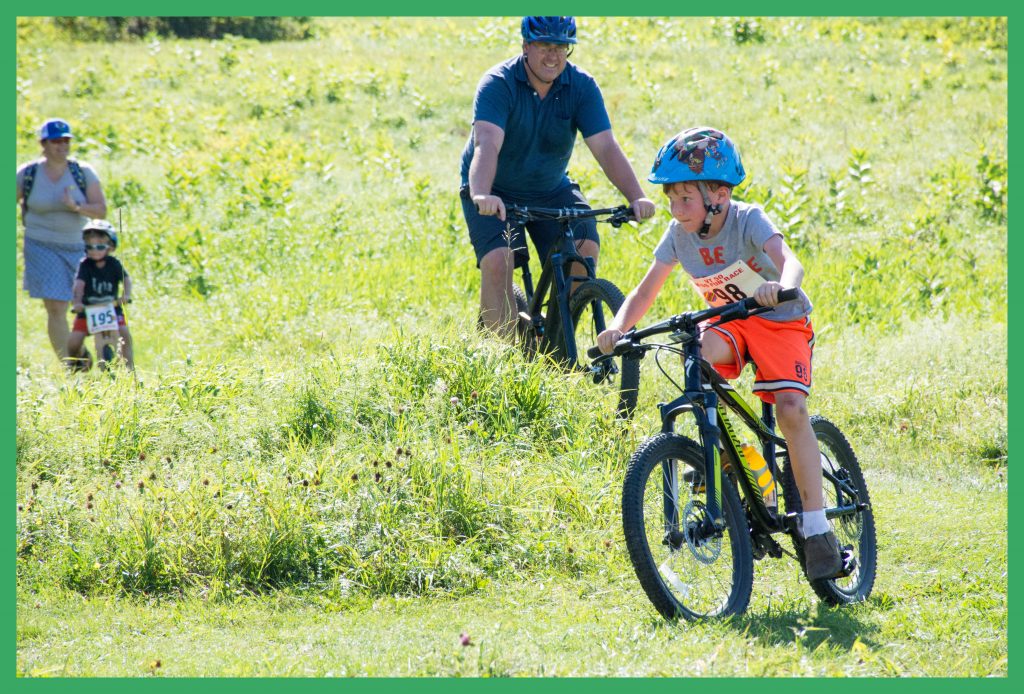 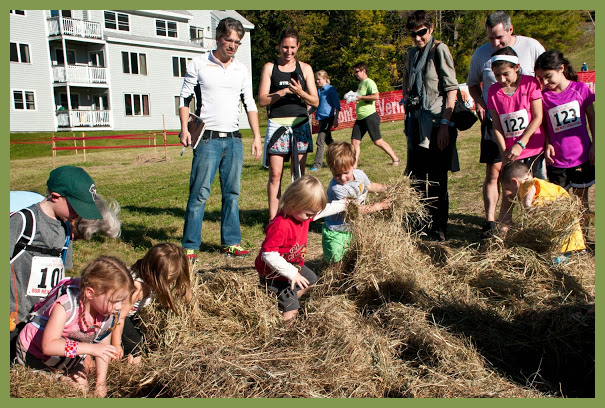 The Treasure Hunt follows the Kid’s Race so have the little ones bring sand pails to collect their treasures! 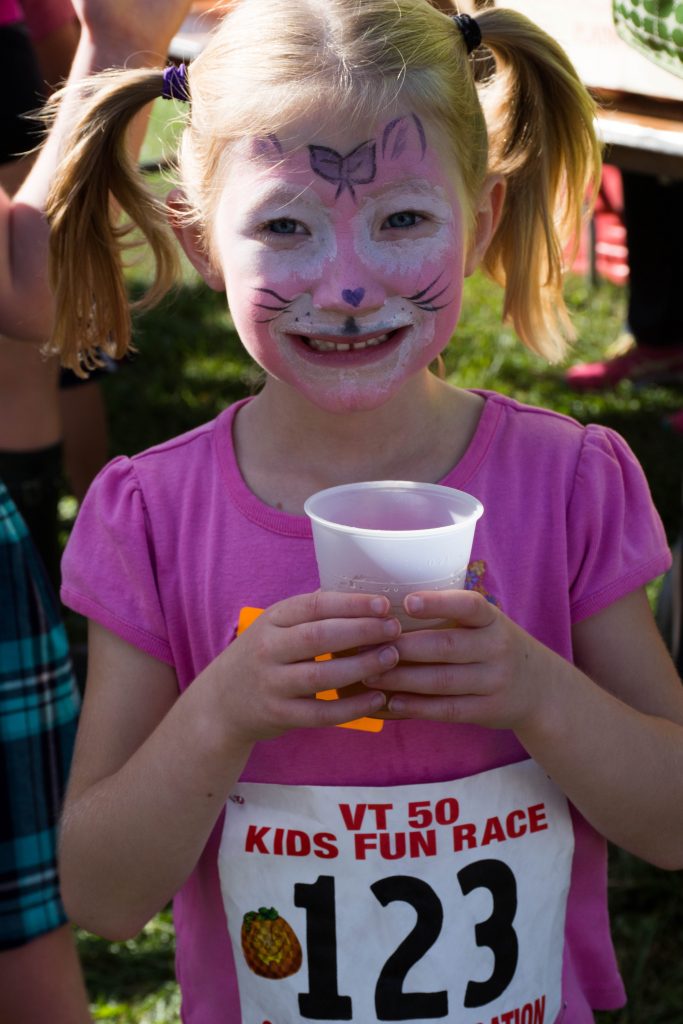 About Vermont Adaptive Ski and Sports

Vermont Adaptive, founded by Laura Farrell in 1987, started at Ascutney Mountain Resort as the Vermont Handicap Ski Foundation. It was the first adaptive skiing program in Vermont that worked with people of all ages and abilities and promoted the beneficial aspects associated with sports and recreation.

During this same time, Laura and her running and equine friends and dedicated supporters of the organization established the VT 100 and the VT 50 races to help subsidize the organizational expenses.

In 1989 The Ski Foundation grew to include summer activities such as canoeing and rock climbing in Southern Vermont. By 1991 the adaptive skiing program expanded to Northern Vermont, beginning winter program operations at Sugarbush Resort.

By 1996, the organization offered full-time statewide programs and adopted the name Vermont Adaptive Ski and Sports with the mission to provide year-round recreational opportunities to individuals with disabilities.

In 1998, Vermont Adaptive expanded its summer programming by collaborating with Lake Champlain Community Sailing Center to bring an Adaptive Water Sports program to the Champlain Valley.

In the spring of 2000, Vermont Adaptive played a large part in the development and creation of the first inclusive camp in Chittenden County. “Partners in Adventure” pairs able bodied and disabled campers ages 11-17 together for adventure and activities and is still a program partner today.

In 2002 Vermont Adaptive developed, trained and sponsored a disabled alpine ski team to participate in the Diana Golden Race Series held throughout the Northeast. The series is designed to allow disabled athletes to become familiar with the sport of alpine ski racing in a fun and supportive environment.

Vermont Adaptive and United States Association for Blind Athletes (USABA) partnered in 2007 to offer the first National Winter Festival “learn to ski, learn to race and Nordic event” for visually impaired and blind athletes. The organization has hosted the event ever since.

Sadly, in 2008, Vermont Adaptive lost a great friend, Jim Hutchinson. For many years Jim served on the Board of Directors; Jim was a volunteer, a Race Director for the VT 100, and at one time served as the Executive Director. Through his active involvement his presence is inherently woven into the fabric of the organization we are today. In Jim’s memory, we honor our top volunteers with the “Jim Hutchinson Volunteer of the Year Award.”

To better serve Chittenden County, in 2008 Vermont Adaptive expanded to a third Winter Program location at Bolton Valley Ski Area. Its proximity to Burlington and the rest of Chittenden County provide a convenient location for many year-round residents.

The inaugural Century Ride to Benefit Vermont Adaptive began in 2011 by the Black Family sponsored by the Lookout Tavern in Killington. This event quickly grew, and Long Trail Brewing partnered in 2012 as the title sponsor. The event remains a strong source of operational funding along with the VT 100 and VT 50.

In 2013 Vermont Adaptive completed construction of the first adaptive sports center in Vermont, the Andrea Mead Lawrence Lodge at Pico Mountain. This is a fully accessible space designed for the unique needs of our clients and families for programs, administration and storage. This project was completed in partnership with the Pico Ski Education Foundation. 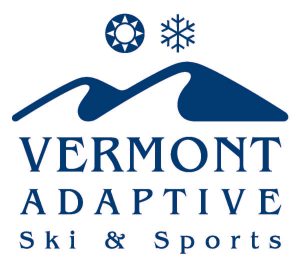 Donations:
Vermont Adaptive, the race net proceeds benefactor, is a non-profit that provides sports opportunities to individuals with disabilities, and is supported greatly by donations. Visit the donors page of our website at vermontadaptive.org for more information on donating, or donate now.
Where Your Donations Go, info sheet.

The Vermont 50 Mountain Bike or Ultra Run was founded in 1993 by Laura Farrell. She is also the Founder of Vermont Adaptive Ski and Sports and The Vermont 100 Endurance Run

Stress Free Registration
We’ve set a $25,000 fundraising goal for to show our continued support Vermont Adaptive. If you commit to raise a minimum of $500 before September 6 at noon ET, you can avoid race registration on May 25th and will be entered into the race by the Race Director.
You must contact the Race Director, Mike before May 25,  at 7 p.m. if you’d like to choose this option.